Fire is the rapid oxidation of a material (the fuel) in the exothermic chemical process of combustion, releasing heat, light, and various reaction products. Fire in its most common form can result in conflagration, which has the potential to cause physical damage through burning. Fire is an important Process that affects ecological systems around the globe. The positive effects of fire include stimulating growth and maintaining various ecological systems. Its negative effects include hazard to life and property, atmospheric pollution, and water contamination. Which brings in The Fire Fighting Systems, Fire protection (Fire Fighting systems) is the study and practice of mitigating the unwanted effects of potentially destructive fires.

A class “A” fire can involve any material that has a burning ember or leaves an ash. Common examples of class “A” fires would be wood, paper, or pulp. The preferred method for extinguishing class “A” fires is to remove the heat. Water is the most common agent, but others such as dry chemical, halon, halogenated agents and foamcan be used effectively.

A class “B” fire involves flammable liquid or gas. Familiar examples would be gasoline, oil, propane, and natural gas. A variety of fire extinguishing agents is used on flammable liquid fires employing all theories of fire extinguishment. Which agent is best to use is dependent upon the circumstances involved. Flammable liquids do not ignite in their liquid state; rather it is the vapor’s being generated by these liquids that ignite. The mixture of oxygen and flammable vapor’s in proper proportion needs only an ignition source to start the combustion process.

Class “C” fires involve live electrical equipment and require the use of an extinguishing agent and/or extinguisher that will not conduct electricity back to the fire fighter(s). Electricity is an energy source and an ignition source, but by itself will not burn. Instead, the live electrical equipment may serve as a source of ignition for a class “A “fire such as insulation or packing, or a class “B” fire.

Class “D” fires involve exotic metals such as titanium, zirconium, magnesium, and sodium. These fires require special agents such as dry powders and special application techniques. The extinguishing agents and techniques used on “A”, “B”, or “C” fires will not work on class “D” fires, nor will the agents and techniques used for class “D” fires work on any other classification of fire. Many common agents like water will actually react to burning metals and increase the intensity of the fire in a violent manner.

Class “K” fires involve cooking media. These can be any animal or vegetable-based fats or oils. These fires require special agents such as wet chemical extinguishers and systems that are alkaline in nature and have superior cooling capabilities. The entire mass of the cooking medium in a deep fat fryer must be secured and cooled below its auto ignition point in order to achieve complete extinguishment. 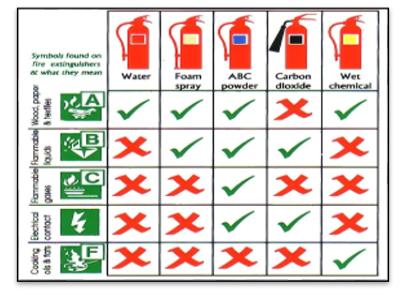 Depending on the specific fire types, fire extinguishers are also   classified into six groups as listed below: 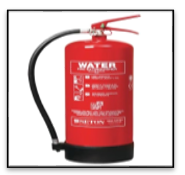 Foam fire extinguishers find their application to put out class A and class B fires. They blanket the fire with foam generated when the spray hits the air. This blanket prevents the vapours from reaching the air. Also, the water in the foam provides a cooling effect to prevent re-ignition. Foam fire extinguishers carry a cream label. 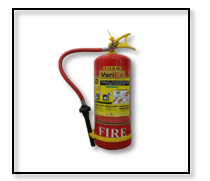 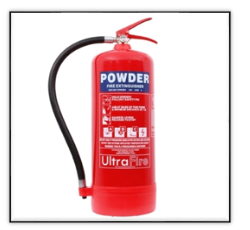 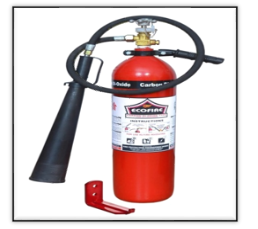 CO­2 Flooding System – CO2 flooding system or central bank CO2 system is one of the common fixed fires fighting system installed on most of the ships. It releases carbon dioxide (CO2) in bulk quantity to a protected space under fire. Smothering action of CO2 extinguishes the fire thereby preventing spreading of fire to other parts of the ship. It consists of several CO2 cylinders located in a separate room, called CO2 room.

This Research Suggest the possibility of use of CO2 flooding and water sprinkler system by the means of double-walled pipe system.

F. Objectives of this Study

The aim is to Protect Human Life and Property.

CO2 flooding system or central bank CO2 system is one of the common fixed fires fighting system installed on most of the ships. It releases carbon dioxide (CO2) in bulk quantity to a protected space under fire. Smothering action of CO2 extinguishes the fire thereby preventing spreading of fire to other parts. It consists of several CO2 cylinders located in a separate room, called CO2 room. These bottles contain CO2 in liquid state. When the fire in a protected space goes out of control or in a situation when the fire is not able to extinguish by local firefighting media, CO2 flooding system comes into picture. CO2 from the bottles directed via common manifold, main valve and distribution pipe lines to nozzles through which it is released to the protected space for fire extinction. Due to safety reasons, the CO2 flooding system is manually released from a release cabinet located outside the protected space.

Carbon dioxide is the fire extinguishing medium used in CO2 flooding system. It is an effective fire suppression agent applicable to a wide range of fire hazards. It has a high rate of expansion which allows it to work fast. When applied to a fire, CO2 provides a heavy blanket of gas that reduces the oxygen level to a point where combustion cannot occur. Since carbon dioxide is a gas, there is no cleaning up associated with a system discharge.

There are several advantages for the CO2 as a fire fighting medium as follows, 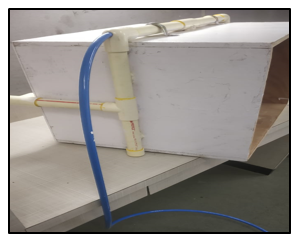 A fire sprinkler system is an active fire protection method, consisting of a water supply system, providing adequate pressure and flow rate to a water distribution piping system, Onto which fire sprinklers are connected. Although historically only used in factories and large commercial buildings.

a. Sprinkler systems are automatic and respond at all times.

b. Significantly less heat and smoke is generated if the fire is extinguished at inception

d. Fire fighters are exposed to much less danger if the fire is kept in check by a sprinkler system.

Even though Both the Fire protection system, the CO2 Flooding System and Fire Sprinkler System, are able to extinguish fire.

The Question is why to use CO2 flooding and water sprinkler system by the means of double-walled pipe system?

This Research is mainly done considering. To use any of the Two System, According to the Area of use or the material stored in the area and for the possibility of Person getting stuck in the CO2 Flooding.

a. CO2 is highly asphyxiating. 9% concentration causes unconsciousness within minutes

b. Very little cooling effect. So there is danger of re-ignition.

a. The structure of sprinkler system.

b. The maintenance issues and problems of water shortage etc.

First sprinkler system used in Double-walled pipe system. A dry pipe sprinkler system is one in which pipes are filled with pressurized air or nitrogen, rather than water. This air holds a remote valve, known as a dry pipe valve, in a closed position. Located in a heated space, the dry-pipe valve prevents water from entering the pipe until a fire causes one or more sprinklers to operate. Once this happens, the air escapes and the dry pipe valve releases. Water then enters the pipe, flowing through open sprinklers onto the fire.

Many people view dry pipe sprinklers as advantageous for protection of collections and other water sensitive areas. This perceived benefit is due to a fear that a physically damaged wet pipe system will leak while dry pipe systems will not. In these situations, however, dry pipe systems will generally not offer any advantage over wet pipe systems. Should impact damage happen, there will only be a mild discharge delay, i.e. 1 minute, while air in the piping is released before water flow.

After comparing the system in separated use the double-walled pipe system of CO2 Flooding and Fire Sprinkler System have the advantage. Advantages of using according to situation (properties of the material) in the room and also can be used at a same time increase the extinguishing property and as in case if the person is stuck inside he should be able to turn off the CO2 Flooding. 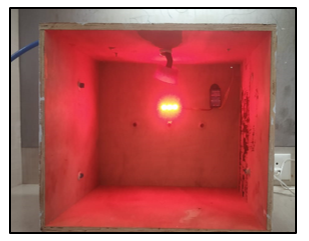 This project gives the knowledge of combining two extinguishing systems (Fire Protection System) are as follows, • CO2 flooding system. • Sprinkler system. This Research concludes that the combine process of CO2 flooding and Sprinkler system is possible to use and can be applied and can be used according to situation e.g. If any human being gets trapped in server room, which has C02 flooding type of extinguishment which may lead to death of the person by means of suffocation. By introducing this Research concept, we would be able to save the human life, by using water Sprinkler system, and shutting of the CO2 system and down the power of the building.

Copyright © 2022 Akshay Saykar, Chaitanya Tuwar, Prajwal Thakare, Dr. Amol Raundal. This is an open access article distributed under the Creative Commons Attribution License, which permits unrestricted use, distribution, and reproduction in any medium, provided the original work is properly cited.