As we all are aware about the rapid raise in wireless communication has huge demand. Spectrum sensing acts a key role part in (CR)network to highlight presence of the resource . This project focuses on the issues of Spectrum sensing in detection performance in process is usually compromised with the multipath. Cast of shadow over and receive uncertain errors. To alleviate the consequences of these errors Cooperative been shown that well organized methodology to intensify the detection performance. We also talk about the performance of the CR for 5th generation & if possible route the frequency allocation .Taking into count many detection performance of cooperative secondary users, we have gather a completely unique reliability based decision combination program where weight is assign to each and every secondary user local conclusion supported its reliability .As the grasp of local prospect of detection and warning for every secondary detector might not be aware of the practice , we also employ a counting process to reckon these probabilities supported past global and native decisions.

Cognitive Radio plays a vital art of plan to fortify spectrum efficiency, allowing the secondary user (SU) to avail oneself of the licensed spectrum of first user when PU is inactive. This type of time slot is known as the spectrum hole CR has two big functions: Spectrum sensing and adaption To check the energy detection conventionally, spectrum sensing is generally used. Earlier, SU first prefers to verify the spectrum band using energy collection periodically. If spectrum hole is there, SU will immediately take into count this point interval to transmit data up converting to the PU, it will immediately stop transmitting and provides the spectrum back to PU. The SU keeps detecting the spectrum in its own time till make conversation of upcoming spectrum hole. Apart from the model mentioned above where SU executes the sensing only it is not able to transfer the data , a pair of full duplex spectrum sensing schemas are put forward throughout the SU at the same time contrivance transmitting or not investigate present a replacement design paradigm for future. CR by traversing the full duplex technique to perceive the full duplex techniques to understand at the same time spectrum sensing and data transmission in, published during a magazine to search the research direction of the key and put forward a commutable to enhance Sus ‘ throughput by switching in both the “Listen-and-Talk” and “Listen-Before-Talk” rules in . Non-time-slotted CR has been inquired into  and therefore the full duplex spectrum scheme is put ahead for non-time-slotted cognitive radio network in . Afifi and Krunz  utilize self-interference repression for improved spectrum cognizance /efficiency in concurrent transmit & receive mode. The probability of expanding full-duplex designs to support multiple input, multiple output (MIMO) system using material hardware has been discussed in . Tsakalaket al.  describes the fundamental design challenges and hardware requirement thatre strain CRs from simultaneous and constantly sensing the spectrum while transferring within the same waveband. This paper comprise of two SUs. One SU transmit the data & another SU receives the information. The SU which is employed to pass this information is named TSU while one receiving the information is named RSU. One is TSU and another is RSU are radio transceiver. During the paper, a thoroughly unique detecting algorithm is put forth by combining a flexible sensing in TSU and hence the BER detection in RSU. One point to be mentioned is that we disregard the overhead effect during this paper as the information is a smaller quantity and trivial. The corresponding expectation of detection also as the warning are if, on the idea of which the use of spectrum holes is statistical derived.  With the advance spectrum detecting algorithm, a spectrum sensing window is meant to magnify the spectrum exertion.

Different aspect of Cognitive Radio technology is balance. For spectrum sensing primarily three Signal processing Techniques are put forward in the literature. Matched filter, Energy Detection, and cyclo-stationary characteristic detection. Matched filtering is perfect. still, it requires overall knowledge of primary signaling. But when there is no knowledge of primary signaling. But when no mastery about then first user signal is presumed, an Energy Detector is perfect. Hence most of the paper are supported energy detection. Also, a replacement standard of IEEE on (CR) (IEEE 802.22) will furnish for spectrum sensing through energy detection. The limitations of local spectrum sensing are illustrated in some. within the production of fusion rules AND, OR & MAJORITY is contrast to alternative nodes then cooperative spectrum sensing carry out worse than the only node spectrum sensing. Thus, the fusion center takes a superlative weighted sum of  local decision to reach from various user and transpire at the final decision. Spectrum sensing is taken into consideration during a cooperative communication context. Two secondary users cooperate utilizing the amplify and Forward protocol. A conviction level-based voting scheme is proposed to decrease the quantity of energy used in executing the spectrum the performance loss negligible. During a dual-threshold, a scheme is put forward to scale is put forward to decrease the quantity to scale back the bandwidth requirement to execute spectrum sensing. The upward mentioned studies detect the spectrum hole from one snapshot of the observation from multiple  node. All through this paper, we have enlarged systematic decentralized algorithm to identify the changes within the dispersal of a stochastic sequence. It’s already known that the sequential detection techniques perform finer than the perfect rules supported by one observation. These techniques profitable use the past observation alongside the present. Most recently, these algorithms are used in the consolidated setup also. These are often executed online, are iterative-aspect in nature and need minimal computational at each step. 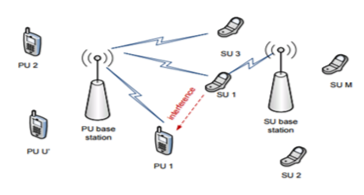 MATLAB is easy to learn, flexible and extremely valuable for designers and different experts. MATLAB is a unique-purpose language that is an excellent choice for composing moderate-size programs that take care of issues along with the handling of numbers. The outline of the language makes it conceivable to compose an effective program in a couple of lines. The issues might be somewhat complicated, while the MATLAB programs that tackle them are generally basic: relative to the identical program written in a general purpose language, for example, C++ or Java. Accordingly, MATLAB is being utilized in vast diverse areas from the natural sciences, through all disciplines of engineering, to finance, and beyond, and it is intensely utilized as  part of industry. Henceforth, a strong foundation in MATLAB is a key aptitude in today's occupation advertise.