Credit Card Fraud can be defined as a case where a person uses someone else’s credit card for personal reasons while the owner and the card issuing authorities are unaware of the fact that the card is being used. Due to rise and acceleration of E- Commerce, there has been a tremendous use of credit cards for online shopping which led to High amount of frauds related to credit cards. In the era of digitalization, the need to identify credit card frauds is necessary. Fraud detection involves monitoring and analyzing the behavior of various users in order to estimate detect or avoid undesirable behavior. In order to identify credit card fraud detection effectively, we need to understand the various technologies, algorithms and types involved in detecting credit card frauds. Algorithm can differentiate transactions which are fraudulent or not. Find fraud, they need to passed dataset and knowledge of fraudulent transaction. They analyze the dataset and classify all transactions.

Fraud detection involves monitoring the activities of populations of users in order to estimate, perceive or avoid objectionable behavior, which consist of fraud, intrusion, and defaulting. Machine learning algorithms are employed to analyses all the authorized transactions and report the suspicious ones. These reports are investigated by professionals who contact the cardholders to confirm if the transaction was genuine or fraudulent. The investigators provide a feedback to the automated system which is used to train and update the algorithm to eventually improve the fraud-detection performance over   time.

As the information technology is developing the fraud is also increasing as a result financial loss due to fraud is also very large. A cost sensitive decision tree approach has been used for fraud detection. A cost called misclassification cost is used which is taken as varying as well as priorities of the fraud also differs according to individual records. So common performance metrics such as accuracy, True Positive Rate (TPR) or even area Under Curve cannot be used to evaluate the performance of the models because they accept each fraud as having the same priority regardless of the amount of that fraudulent transaction or the available usable limit of the card used in the transaction at that time. For avoiding this a new performance metric which prioritizes each fraudulent transaction in a meaningful way and it also checks the performance of the model in minimizing the total financial loss. The measure used is Saved Loss Rate (SLR) which is the saved percentage of the potential financial loss that is the sum of the available usable limits of the cards from which fraudulent transactions are committed.

They had focused on the techniques which are Regression, classification, Logistic regression, Support vector machine, Neural network, Artificial Immune system K-nearest Neighbor, Naïve Bayes, Genetic Algorithm, Data mining, Decision Tree, Fuzzy logic-based system, etc.Prajal Save et al. [18] have proposed a model based on a decision tree and a combination of Luhn's and Hunt's algorithms. Luhn's algorithm is used to determine whether an incoming transaction is fraudulent or not. It validates credit card numbers via the input, which is the credit card number. Address Mismatch and Degree of Outlierness are used to assess the deviation of each incoming transaction from the cardholder's normal profile.

Credit Card Fraud Detection 11 Tamojit Das -tamo.das.97@gmail.com More precisely, locality is given by k-nearest neighbors, whose distance is used to estimate the local data. The pseudocode for this algorithm is written as: On plotting the results of Local Outlier Factor algorithm, we get the following figure: By comparing the local values of a sample to that of its neighbors, one can identify samples that are substantially lower than their neighbors. These values are quite amanous and they are considered as outliers. As the dataset is very large, we used only a fraction of it in out tests to reduce processing times. The final result with the complete dataset processed is also determined and is given in the results section of this paper. 2. Isolation Forest Algorithm The Isolation Forest isolates observations by arbitrarily selecting a feature and then randomly selecting a split value between the maximum and minimum values of the designated feature. Recursive partitioning can be represented by a tree, the number of splits required to isolate a sample is equivalent to the path length root node to terminating node. The average of this path length gives a measure of normality and the decision function which we use. The pseudocode for this algorithm can be written as: On plotting the results of Isolation Forest algorithm, we get the following figure: Partitioning them randomly produces shorter paths for anomalies. When a forest of random trees mutually produces shorter path lengths for specific samples, they are extremely likely to be anomalies. Once the anomalies are detected, the system can be used to report them to the concerned authorities. For testing purposes, we are comparing the outputs of these algorithm to determine their accuracy and precision

Identify fraudulent credit card transactions. Given the class imbalance ratio, we recommend measuring the accuracy using the Area Under the Precision-Recall Curve (AUPRC). Confusion matrix accuracy is not meaningful for unbalanced classification. The code prints out the number of false positives it detected and compares it with the actual values. This is used to calculate the accuracy score and precision of the algorithms. The fraction of data we used for faster testing is 10% of the entire dataset. The complete dataset is also used at the end and both the results are printed. These results along with classification report for each algorithm is given in the output as follows, where class 0 means the transaction was determined to be valid and 1 means it was determined as a fraud transaction.

I would like to express my deep gratitude to Professor Mrs. R.B.GURAV, our project guide, for their patient guidance, enthusiastic encouragement and useful critiques of this research work.

I would also like to thank Mrs. V.R. Palandurkar, for her advice and assistance in keeping my progress on schedule.

I would also like to extend my thanks to the technicians of the laboratory of the Information Technology department for their help in offering me the resources in running the program.

Finally, I wish to thank my parents for their support and encouragement throughout my study.

Fraud detection is a complex issue that requires a substantial amount of planning before throwing machine learning algorithms at it. Nonetheless, it is also an application of data science and machine learning for the good, which makes sure that the customer’s money is safe and not easily tampered with. Future work will include a comprehensive tuning of the Random Forest algorithm I talked about earlier. Having a data set with non-anonymized features would make this particularly interesting as outputting the feature importance would enable one to see what specific factors are most important for detecting fraudulent transactions. As always, if you have any questions or found mistakes, please do not hesitate to reach out to me. A link to the notebook with my code is provided at the beginning of this article. 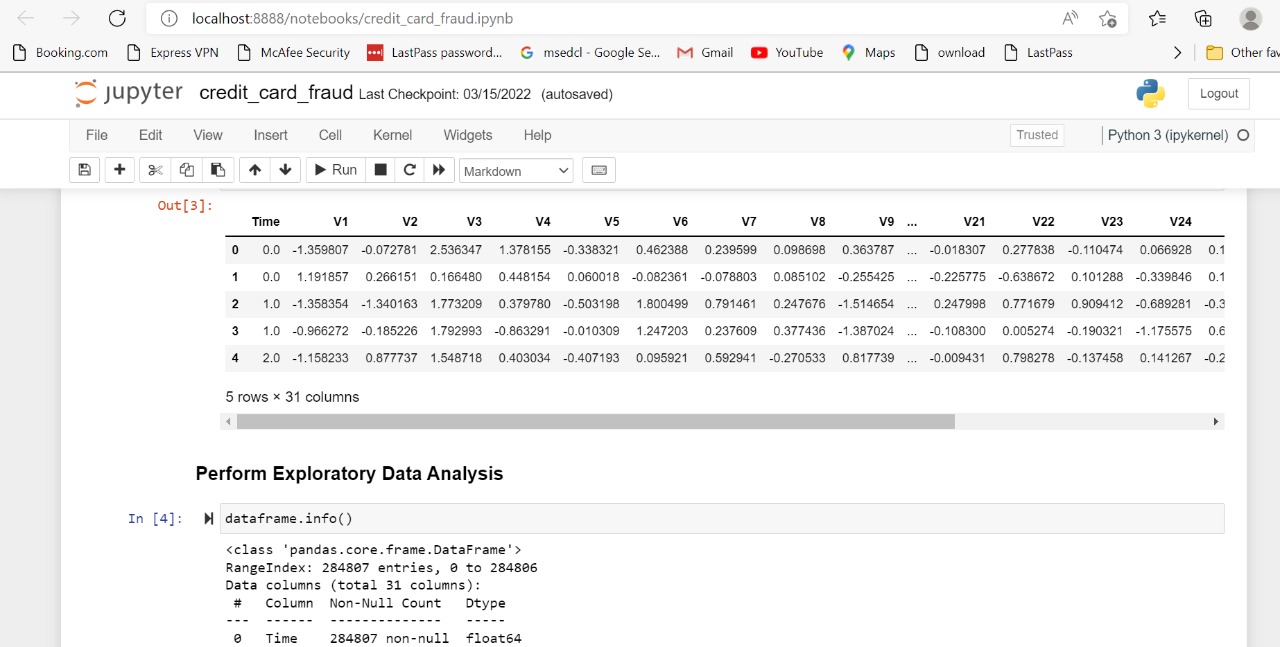