Flooding is considered one of the most destructive natural disasters in the world. In countries like India with climatic conditions occurrence of heavy rain fall and subsequent discharge of water leads to Flood. Flooding creates major damages to life, their habitats and the economy By installing of flood alerting systems near major waterways vital information can be provide so that lives and property can be protected. Normal Weather monitoring and alerting systems are not quick and accurate enough to predict floods in time to prevent personal or environmental damages. The government has to spend tons of money in flood mitigation plans to help the victims and also to reduce the number in the long run damages that can occur after flooding. Since Most of the flood alerting systems involves high cost they are deployed on select locations based on priority. In this project we make use of a cost effective system using raspberry pi board and sensors, to measure rise of water level in rivers and water bodies and alert government authorities and people instantly by transmitting information using IOT. In the present work we have used thingspeak-IOT platform and GSM module. The data can be accessed from android smart phones using things View mobile application at anytime from anywhere in the world where GSM module is used to send the alert message to the people.

The extreme climatic changes due to the effect from various human activities such as pollutions, cutting of innumerable trees and too much of gas emission are the some of the main reason for natural disasters that occur in worldwide . The most common factor that cause major damage to life, property and country’s economy is the flood .Flooding is brought on by an increased quantity of water in lake or river when it is overflowing. When a dam fractures and abruptly releasing a massive quantity of water not only houses and property are damaged , sewage overflow and chemical spillage also leads to a variety of diseases afterwards. To manage these kind of situations and alert people understanding of increased water level and speed of water flow are valuable for discovering potential seriousness of the flood. This project presents the details of how the data - like flood level and rain intensity are collected from sensors and made available on cloud and sending alert messages by using Raspberry pi , Thingspeak-an IOT platform and a Global System for Mobile communication (GSM) and short message service (SMS) to relay data from sensors to computers or directly alert the People of that area through their mobile phone. The data from the IOT cloud can be accessed by android smart phones at anytime from anywhere in the world using the mobile app things view.

The proposed flood alerting system to check the flood level basically consists of a Raspberry pi which detects the water level and rain intensity using an Ultrasonic Distance Sensor (HC-SR04) and rain sensor respectively. The ultrasonic distance sensor –which is used to measures the time of travel by echo signal gives the water level of flood in river. The Rain Sensor is used to show the Rain status that it’s raining or not, and its rain intensity Value.

The Pi board is also programmed to send the data to a cloud are using an external web server named as Thingspeak so as to alert the general public.

By applying an Internet of Thing can help people to monitor the flood water level and rain intensity via thingsview app in smartphone together with the alerting system for incoming flood. A wireless sensor node connected with Raspberry pi is used which consist of ultrasonic sensors and rain sensor to collect data and sent them via cloud to be viewed in Thingsview application. GSM Module is used to send alert SMS to the People When the water level reaches a certain level of hazards, the device will generate an alarm system with three different colours of LEDs indicating three levels of detection for flood level and send Alert notification to the people on incoming flood in that area. 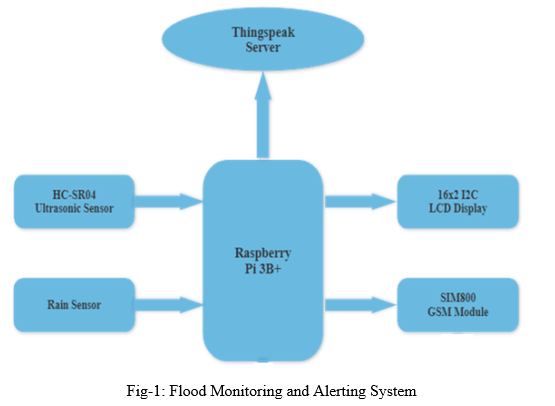 A. Raspberry Pi3 Model B+

Raspberry pi acts as the Processing Unit of this system. Raspberry pi detects the water level and rain intensity using an Ultrasonic Distance Sensor (HC-SR04) and rain sensor respectively.  It has 4 USB ports and the ports have been aligned with the Ethernet connector to make more streamlined design. The Raspberry Pi 3 range, boasting a 64-bit quad core processor running at 1.4GHz, dual-band 2.4GHz and 5GHz wireless LAN, Bluetooth 4.2/BLE, faster Ethernet, and PoE capability via a separate PoE HAT. 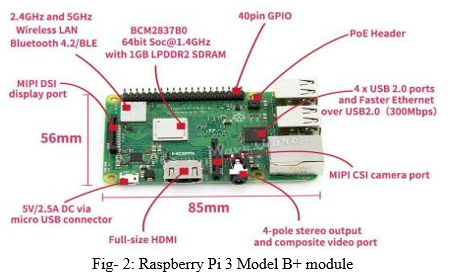 The Rain Sensor is used to detect the rainfall or water drops. It works as a switch. Normally the switch is open condition. This sensor is consisting of mainly two parts, one is Sensing Pad and another one is the Sensor Module. When rainfall or water drops fall on the Sensing Pad surface, then the switch will be closed. The Sensor Module reads data from the sensor pad and processes the data and converts it into a digital/analog output. So, the sensor can provide both types of output Digital output (DO) and Analog output (AO). 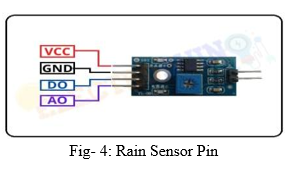 PCF8591 is an 8-bit analog to digital or 8 bits digital to analog converter module meaning each pin can read analog values up to 256. It also has LDR and thermistor circuit provided on the board. This module has four analog input and one analog output. It works on I2C communication, so there are SCL and SDA pins for serial clock and serial data address. It requires 2.5-6V supply voltage and have low stand-by current. 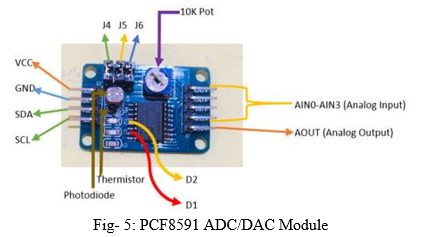 The PCF8574 device is an 8-bit I/O expander for the two-line bidirectional bus (I2C) is designed for 2.5-V to 5.5-V VCC operation. A typical I2C LCD display consists of a Hitachi’s HD44780 based character LCD display and an I2C LCD adapter.

A regular LCD requires a lot of wires (parallel interface) to be connected with a Microcontroller. The Serial LCD backpack built on PCF8574 IC uses the I2C bus to convert the parallel interface to a serial one. This needs only 2 wires SDA & SCL. The I2C backpack can be soldered on to the LCD. The I2C device has a HEX address by which a microcontroller can communicate with it. This is set by the 3 bits A0, A1, A2.

The device will generate an alarm system with three different colors of LEDs indicating three levels of detection for flood level and send Alert notification to the people on incoming flood in that area. In this project, flood monitoring system using wireless sensor node is developed to observe the status of flood which can alert people who will be in the area frequently affected by floods. Raspberry pi acts as the Processing Unit of this system that attached with ultrasonic and rain sensors to form a wireless sensor node and placed at a high prone area of flood. When the sensors were triggered, all the data will be sent to ThingsView application to be viewed on user’s smartphone via the wireless connection.

Two sensors, Ultrasonic and Rain sensors are used as inputs to the Raspberry pi and power supply of 5V is used to power up the system to function well. The ultrasonic distance sensor is used to detect the flood level at a high prone area of flood (maximum is 4m away from it).

In this project, 50cm of distance from the ultrasonic sensors and the water level will trigger the LED. The ThingsView application provides an interactive and easy to access platform for user or victim to get accurate information on the incoming floods by displaying current condition of flood water level and rain intensity in real-time condition. When there are changes in flood level, the graphs captured the data and change the measurements accordingly. So, when there is immediate change in the measurement, the LEDs will turn on which act as alerting purposes. GSM Module is also used to send alert SMS to the People when the flood water level reached a certain point of hazard. 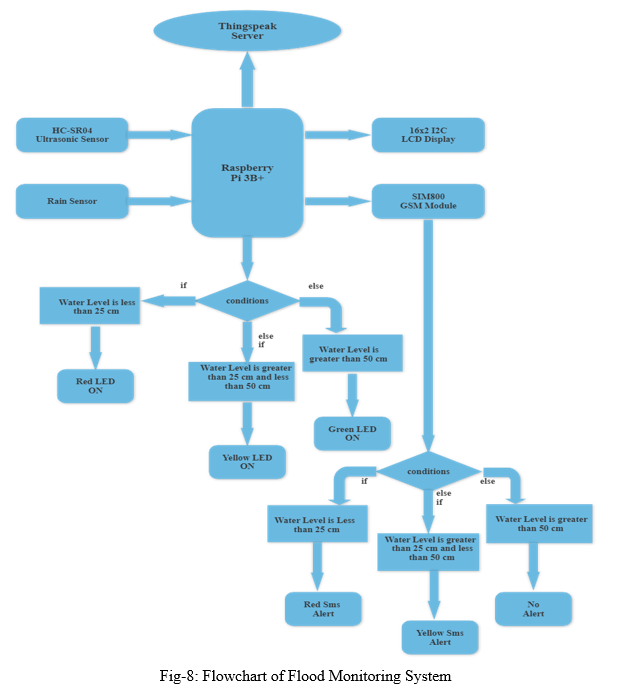 This simulation is been developed using Proteus software. The components require picked from Library. The link is been made using connecting wires. And the result is verified by running the simulation. 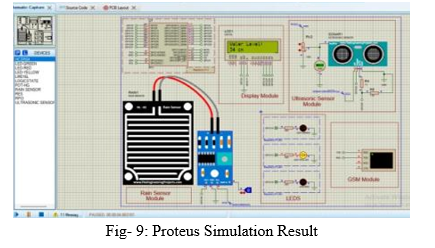 2. In this Things view Smart phone-IOT App we can see my sensor value are get uploaded every second like u can observe water measurement and rain intensity is changing per second as it is uploaded on it and with this data, we can do our monitoring of flood in every harsh and calm conditions. 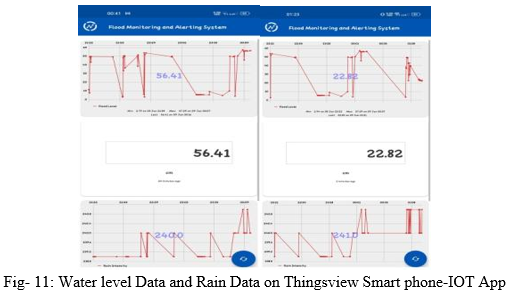 3. Alert messages are sent During Different Condition of Water level measurements on smart-phone messaging App to monitor all the values and alert the people who are living in low- lying areas so that it is easy to evacuate their Homes and move to safe palace. 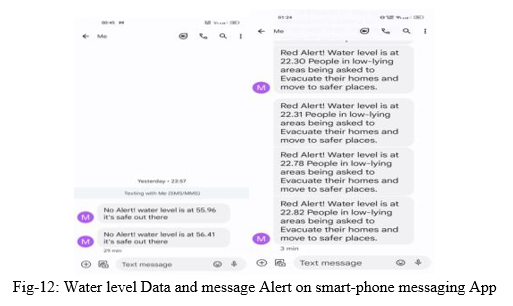 This system can be implemented for the real-life operation purpose. The system will alert you with appropriate information about the Flood. It can detect even an inch raise of water level and give alert. We have tested this system by real time for water level measurement successfully. If the water level increases, it will send an alert immediately. It can be used to   monitor natural calamities. It can be used to monitor the floods water level. System has ability to send alert messages to the people through GSM modem. Users can also monitor flood level from thingsview smart-phone application.

This work is based on our project and research carried out at MIT School of Engineering’s “Microchip Lab”. We thank Prof. Dr. Manoj R. Hans of for his support and guidance throughout the research.

This project deals about the monitoring of flood level and Rain Intensity remotely from anywhere in the world using internet through a personal computer or Smartphone and alert the general public. In this project raw data loaded in the cloud can be visualized in graphical format with in a very short span of time at a remote desk/ mobile app. We have used Raspberry pi and MALAB’s Thingspeak IOT platform along with the sensors for the first time to monitor and alert flood situation. In this system, sensors work with low input power and detects the flood level in the river with a high accuracy. It can detect even an inch raise of water level and give alert. We have tested this system by real time for water level measurement successfully. If the water level increases, it will send an alert immediately. In this study, the prototype is only using a small scale of sensor detection within 50cm. In actual world, the system needs to detect the flood for about 1 to 2 meter if the system is placed at the riverside to detect flood. Besides, this prototype needs to be improved on the water-resistant features so that when the rain started to fall, it cannot damage the sensor node. A proper installation needs to be done so that the system can be put at any kind of surfaces to avoid it being fall down when water level rise up. Therefore, the system could help a huge number of victim’s life whenever the future work could be done on it.

Copyright © 2022 Abhishek Raj, Nancy Hazra, Dr. Manoj R. Hans. This is an open access article distributed under the Creative Commons Attribution License, which permits unrestricted use, distribution, and reproduction in any medium, provided the original work is properly cited.