The primary concerns of our everyday network usage are security and dependability. However, as network technology advances, attackers become more advanced than security. Although firewalls and router-based packet filtering are vital factors of a network security design, they are not sufficient on their own. As a result, the concept of SNORT Intrusion Detection System (IDS) and SNORT Intrusion Prevention System (IPS) is attracting security specialists. Snort, being an open-source intrusion detection system, is simple to configure and deploy in any setting. Some research articles are evaluated based on different performance criteria such as detection accuracy, scalability, and the capacity to identify unknown assaults. To address many difficulties highlighted during the literature study, such as low detection rate, inability to handle large amounts of traffic, unsupported automatic tweaking, and so on, our solution offers a level-based architecture. All levels are meant to be incremental, that is, able to supply the necessary functionality as well as its lower levels. To demonstrate the efficacy of the suggested architecture, we used Code Refactoring to incorporate it all into Snort Tool. In addition, an environment set up for future evaluation of the enhanced Snort Tool performance was provided.

An intrusion may be defined as unlawful entry to someone's property or territory, but in computer science, it is an act that jeopardises the fundamental computer network security goals of confidentiality, integrity, and privacy. Intrusion detection is the process of monitoring and analysing events in a computer system or network for signals of potential threats and violations of computer security practices, acceptable user regulations, or standard security policies. The Intrusion Detection System (IDS) detects intrusions in the network.

It is intended to monitor events that occur in a computer system or network and respond to occurrences that show signs of potential incidents of security policy breaches.

On the other hand, an intrusion prevention system (IPS) is a network security system or technology that is capable of not only detecting but also preventing invasion actions.

There are several forms of faults that can occur in a system, allowing an attacker to obtain access to the system.

Buffer overflows and boundary condition errors are the two most prevalent types of input validation problems. Both of these arise when the software fails to properly check the input from the system. A buffer overflow attack takes advantage of the limits of a buffer, resulting in data overwriting neighbouring memory addresses. A boundary condition error happens when input to a programme leads it to exceed some limit. For example, the input might lead the machine to run out of memory. Access error occurs when the system's access control policy is faulty. As a result, the attacker can use this to obtain control of the system.

The system becomes weak because an exception has occurred. This exception may have gone unnoticed or been handled improperly, allowing the attacker to exploit the system. Configuration Error can also occur as a result of the end administrator's failure to configure the system. This is not the fault of the system's architecture, but of the user who mistakenly set it.

A race condition is a fault in a system in which the output is unexpectedly dependent on the timing of occurrences. Attackers can use race circumstances to launch denial-of-service attacks. In addition, attackers can exploit programmes that achieve race situations while in a privileged state. While in this privileged position, the attacker may induce the system to do illegal tasks.

Snort is an open-source signature-based intrusion detection system that will either discard or allow packets to arrive on a certain interface based on the rules you have configured. is an open-source intrusion detection system.  The power of this tool is in the creation of rules. Rules can be written to restrict traffic or just issue alarms using notifications which can be stored in a log file, forwarded to the console, or shown on the screen. 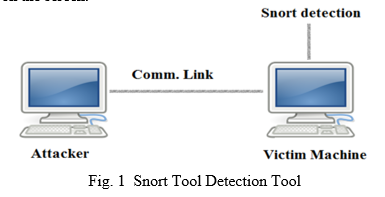 Here in this research, we have set up an architecture where the attacker tries to attack a victim machine. Snort is installed on the victim machine which helps in detecting the attack launched on it by the attacker based on the configuration and snort intrusion detection rules.

Packet Sniffing from the command line simply examines header information and prints the results to the screen. It may also be used as a packet logger mode, logging each packet into log files located in the root directory. The file can later be inspected with Snort or tcpdump. This state is for later use, such as whether someone wishes to inspect the collected packets. This mode is the real use of snort; in this mode, snort monitors the traffic and blocks any undesired traffic using the rules. The other mode is The Network Intrusion Detection System mode (NIDS mode) is the most significant mode when it comes to intrusion detection. Snort as a NIDS mode, employs its rules to detect intrusion activity on the network. Snort can perform real-time packet recording, content searching/matching, and protocol analysis, as well as to detect a series of attacks. It not only detects or identifies intrusions, but it may also prevent them by taking actions such as reject, drop, and block.

A. Configuration of Snort Tool

Snort installation from source code consists of many steps: obtaining the code, configuring it, compiling it, and finally installing it. The rules are created by the user in a text file that is connected to the snort.conf file, which contains all of the snort configurations. After downloading, we must set up the obtained code. The instructions for configuring Snort are shown below in a snapshot Fig. 2 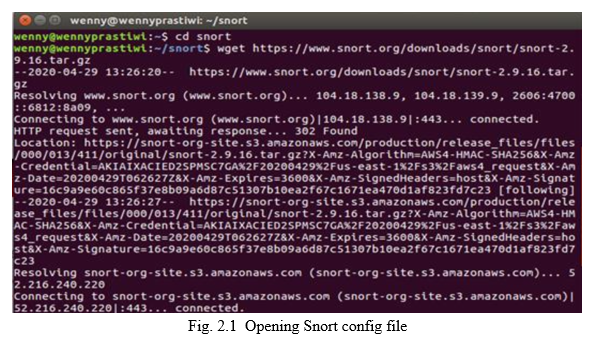 To configure the snort tool we write the following code and instructions in snort.conf file in the code editor and set all the variables in the config code such as HOME_NET IP address and router mac address according to Fig. 2.2  and Fig. 2.3 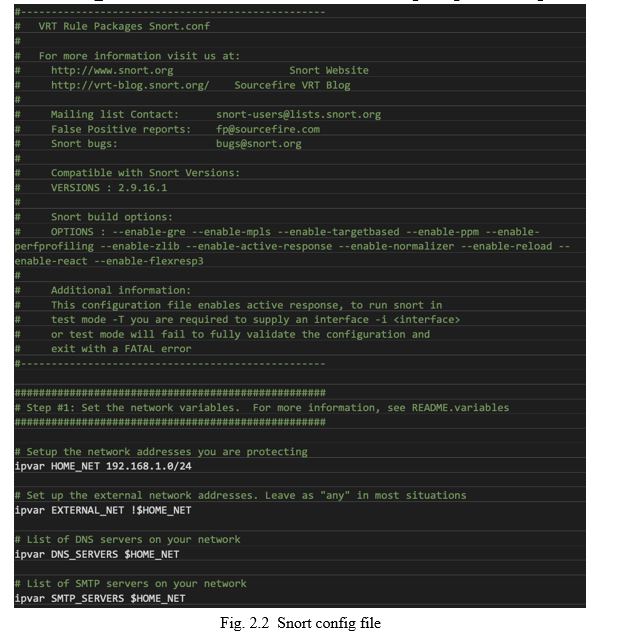 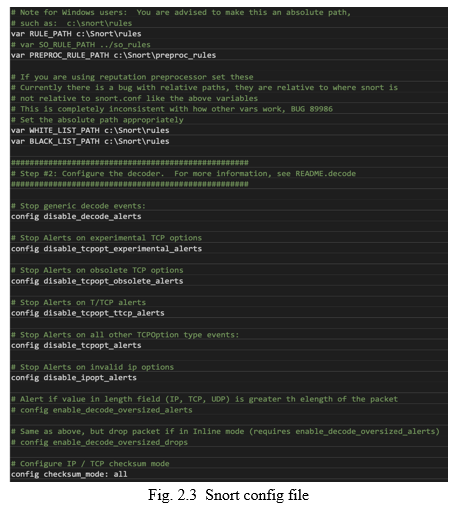 After executing the rules without any error, start the snort tool to detect any intrusion. On the other side on Kali Linux, start a DOS Attack on the windows machine using hping3 TCP flooding. We see that TCP flooding has been identified by the snort and an alert message has been given with each packet request. To perform the experiment we hacked our own router which disconnected all the devices connected to that and at the same time the windows PC running snort on it sent us a “Bad Intrusion Detected!” message along with providing the IP that is pinging our router continuously. This made our computer safe from such attacks.

After familiarisation with IDS and its categories, multiple Snort-based Intrusion Detection strategies are reviewed and realistically conducted in this project to maintain an institution\'s security against threats. With significant limitations, Snort-based IDPS utilising efficient rules, Honeypot, Hardware-assisted method, Neural Networks, and Multi-Sensors-like approaches may prevent from basic intrusions to serious DoS and DDoS type assaults in high speed and Cloud settings. This paper\'s main features include IDPS-related technologies and processes, as well as how SNORT may help in the whole process. The detection rate and false-positive rates of IDPs determine their performance. Nonetheless, IDPs appear to be constantly changing in order to continue to guard against the most recent and sophisticated security threats. There are several ways to improve the effectiveness of a Snort-based intrusion detection and prevention system.

Copyright © 2022 Saloni Anand, Kshitij Patne. This is an open access article distributed under the Creative Commons Attribution License, which permits unrestricted use, distribution, and reproduction in any medium, provided the original work is properly cited.