Designing with economy, grace, and sturdiness is the art and science of structural planning and analysis. To compete in the highly competitive market, structural designing necessitates a thorough structural analysis on which the planning is predicated. The use of software can reduce the number of man hours and efforts required for structural analysis, and an effort was made in the current study to accomplish this goal. This study\\\'s objective is to assess and design a solid-deck slab bridge using STAAD-Pro and a manual process under various loading circumstances. Additionally, STAAD-Pro, which runs through numerous load combinations, was used to check the analysis results in terms of shear, bending moment, axial force, and deflection. The highest design moments produced by the fusion of different loading scenarios.

A bridge is a building created to create a route over an obstruction such a river, valley, road, etc. Humans built their first bridge out of wood, using rudimentary supports constructed from chopped wood logs. Over the past few decades, there has been unrelenting growth in the volume of traffic on highways due to expansion and fast urbanisation. Numerous new motorways and flyovers are being built to ensure smooth traffic movement. Studying a structure's shape, material, size, and selection should have supported engineering and financial criteria; as a result, studying it aids in determining the economic considerations for the bridge's design and construction. The current research was created to investigate the studies conducted by many researchers in the area of safe and cost-effective bridge design. The study project summarises a variety of previous studies and closes by identifying any gaps in the research as well as the subject of future research. The main bridge was constructed in 1840 utilising timber planks for all other components and trusses with tension verticals made of wrought iron. Today, bridge construction has grown in importance on a global scale. Rapid technical innovation has led to the replacement of the traditional bridge with a new, more affordable structural system. The efficient dispersal of modern highway systems, including urban interchanges, are increasingly using bridges due to growing traffic challenges, economic considerations, and aesthetic considerations. They do so because they are less expensive to build, require less maintenance, and last longer than conventional bridges. Beam, truss, arch, cantilever, cable-stay, and suspension formed the contemporary bridge. Beam bridge refers to the horizontal beam that is supported at one end. An arch bridge is a bridge with curving arch-shaped abutments at each end. A bridge of a different type that relies on suspension cables is known as a suspension bridge. The distribution of the forces of tension, shear, compression, and bending is taken into consideration when designing bridges. They are widely used in bridge systems and high-speed vehicular traffic because they are more stable, functional, and aesthetically appealing.

Bridge construction evolved alongside human civilisation. Primarily, nature created the bridge. The first instance of a beam type bridge was the tree that unintentionally fell across the stream. Similar to how the rock arch, which was naturally produced by the rock itself, was the first arch type bridge ever built. Similar to how a suspension bridge was made from creepers that hung from one tree to another. Primitive people descended from nature and imitated its structures, including suspension and beam bridges. Bridges were the main structures built by the prehistoric man as he walked around in search of food and shelter.

ecause they are simple to prepare and install in a variety of shapes and sizes, concrete decks are the most popular type of deck utilised in bridge construction. Decks made of concrete offer great traction control, durability, and wear resistance. Additionally, drainage systems, reinforcing coverings, bridge skew, and slab thickness all significantly affect how long a concrete deck will last.

Corrosion of the reinforcing is the main cause of the degeneration of concrete slabs. Corrosion typically arises from a chloride assault (concentrations of chloride molecules seeping through cracks in decks).

Solid rectangular (fig. 1) is not a structurally effective shape for bridges because it has a low moment of area compared to its area and weight. These decks typically have relatively short spans (up to 20 m), and the cost of their construction and strengthening is notprohibitive.

In general, composite bridge decks are composed of structural steel and concrete components. It is frequently employed in bridge building due to its adaptability to various geometries and design limitations, as well as its dependability. Shear connectors implanted in concrete are used by composite decks to transmit shear stresses, and a steel beam is joined to the other end. Steel is good at tensing and compressing, but concrete is strong at compression. Deflection can be greatly decreased in this way. The steel members can be reused later on in addition to being recycled after destruction. The steel is easier to build as a major member than the concrete girder. 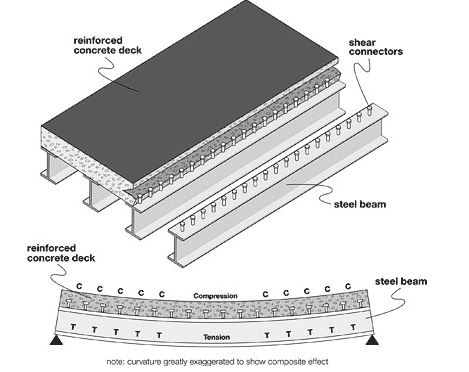 Zaffar and Singh (2016) Design and evaluation of slabs for bridge decks. Bridges are lifelines and supporters that enable makeshift road networks. In addition to enhancing traffic throughput, bridges maintain traffic safety. Bridge designs have thus attracted a lot of interest. This article uses STAAD Pro to analyse and build Deck Slab bridges based on IRC Loading. a four-girder elevated deck with a 100 m by 16 m span. The strategy has been used to guarantee that the outcomes are appropriate for each input design, attribute, and parameter by taking into account AASHTO's standard design. The nodal displacement, beam characteristics, vehicle loading information, and concrete design can all be simply determined by using the analysis and design approach.

Kumar (2017) In this study, the effect of altering span is explored for a medium span reinforced concrete T-beam bridge deck. For an IRC Class-AA tracked load, a span of 25 to 40 metres is considered. STAAD Pro software was used in the design and analysis, along with handwritten calculations. The results of the experiment demonstrated that, for various spans, the dead load bending moment increases with the square of span.

Haymanmyintmaung and Kyawlinnhat (2017) Investigating the integral bridge effect under dynamic loads. help lessen the severe loads placed on integral bridges by distributions. During seismic occurrences, skewed angle bridges typically move disproportionately in transverse directions. MSE+HLAC was the most straightforward technique for reducing stress in all non-skew and skew angle bridges. Extreme seismic stress can result in the extension of span lengths up to 60 m by stress-reduction method analysis of the integrated bridge maximum skew angle in excess of 60°.

This work was completed with the grants and facilities of Lakshmi Narain College Of Technology, Bhopal (M.P.). Authors are thankful to this institute and faculties for extending this cooperation.

Axial, shear, and bending beam maximum forces by section property maximum and minimum values are computed. The impact of vertical loading for six traffic lanes can be calculated using the following information: width, front clearance, rear clearance, number of axles, position in x and position in y with orientation. The orientation varies from 0 to 1.5708. Shear stress varies with load position along the longitudinal edge at a reference point. The largest bending moment occurs in the middle and gradually diminishes toward the edge of the beam. The shear force is greatest near the beam\\\'s edge and gradually diminishes toward the middle. As the size of the beam is decreased, the total deformation, the bending moment, and the shear force at a reference point diminish. When Staad-Pro results are compared to those obtained manually, Staad-Pro produces the highest bending moment and shear force.