Friction stir welding is the solid-state welding method that is used to weld mostly aluminium alloys. A cylindrical tool with a shoulder and pin rotates at high rpm is penetrated at the interface between two materials to be welded. The high rotational speed causes the material to flow plastically and the joint is formed with the traverse movement of the tool. The tool profile, material nature, rpm of tool, traverse speed are the major factors that affect the weld quality. In this research Al 1100 and Al 6061-T6 aluminium alloys were used and the joint is made using Friction Stir Welding. The joint is then tested for the impact strength, tensile strength and microhardness. The tensile test done on Universal Testing Machine and the highest strength was 202.56Mpa found at 1000 rpm and 12mm/min traverse speed. In the impact Charpy test the highest strength found is 0.1494 kj/mm2. The micro hardness test gives the highest value of 52hv at the weld zone at 100 rpm and 12mm/min weld speed. 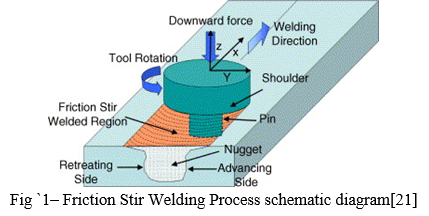 Tool pin design selection plays an important role in deciding the quality of welded joint. The major function of tool is to heat up the parent metal, generate material flow and plastic deformation. Tool rotation speed do the function of stirring of material and mixing of it. Rise in the RPM also increases the heat generation which lead high stirring and mixing of the material. The heat input is largely affected by the force applied, RPM of tool, the length of pin and the diameter of the shoulder.

Al 1100 is mostly made using cold working techniques. Al 1100 is one of the softest Aluminium which limits its applications to the low strength and low pressure. Mostly plumbing and lighting industries use the aluminium 1100 apart from that fin stocks, utensils for cooking, reflectors are also made using this alloy of aluminium. Aluminium 1100 can be welded by various solid state welding techniques in which the friction stir welding is the one. [17]

Kumbhar and Bhanumurthy (2008) did the post weld heat treatment (PWHT) helps in reducing the in homogenities which are present in the FSW welded joints and the mechanical properties are substantially improved after PWHT.[13] Naurani et al. (2011) joined the Al 6061 alloys and used Taguchi optimization method and a temperature-field finite element model to minimize the distance of HAZ from the weld line and the peak temperature.[22] Doos et al. (2007) did  the feasibility study of FSW on Al 6061 Aluminium  pipe and found that the maximum welding efficiency was obtained in the terms of Tensile strength at 630 RPM rotational speed and the travelling speed of 1 mm/sec.[7] Jannet et al. (2013) studied the mechanical properties of the welded joints of 6061 T6 and 5083 O aluminium  joints using the FSW and the conventional fusion welding methods and found that in case of FSW joints the tensile strength was higher and the heat affected zone was narrow as compared to fusion welded joints.[9] A viscusi et al (2019) did the study about the effect of rotational and transverse speed on the strength of lap joint of AA 2024 T3 using friction stir welding and the tensile tests were performed on the specimens the confirmation of the results was done using shear analysis. The best results obtained at 1250 Hz.[1] Fazel et al. (2011) did study on Friction stir welding for stainless steel and titanium and found that composite carbides are useful as the tool material and the two major qualities of the tool are attainable toughness and the resistance to wear [8].

Deghani et al (2013) found that the use of threaded pin can prevent tunnel by forming a bell-shaped nugget zone and stated that the joint strength between aluminium and steel is weak when the rotational speed is high and the plunge depth is low due to the lack of bonding.[15] . Balram et al. (2016) worked using three different welding parameters that consists of rotation speed, travel speed and diameter of the shoulder. Tensile strength value found was 140 Mps. It was concluded that tool geometry has influence on the micro structural properties of the joint. [4] Caizhi Zhou et al (2005) found that the fatigue life of welds made by Friction Stir Welding is 9-12 times is higher than the MIG welds under R = 0.1. The values of fatigue characteristics raised from 39.8 MPa MIG to 67.3 MPa for FSW. [27] Murr et al (1997) found that the microstructures of friction-stir welded 1100 and 6061 Al alloys is mostly consisted of dynamic recrystallization. The researchers also welded 6061 Al to Copper and found that a complex, intercalated microstructure similarly consisted of the dynamic recrystallization. [21, 22] Saini et al (2021) did the evaluation of FSW joint of AZ61a Magnesium alloy and found that highest tensile strength and microhardness were found at 2000 rpm and1800 rpm respectively with welding speed of 20 mm/min each. Microscopic examination of the joints showed the formation of equiaxed grains in the TMAZ and stir zone because of the dynamic recrystallization. [25]

Al6061-T6 and Al1100 are two materials that finds applications in manufacturing of several mechanical parts such as aeronautical and aerospace machinery, marine structures, heat exchangers etc. Frictional stir welding of Al6061-T6 and Al1100 will give an opportunity to use both metals together. The problem here to analyze the tensile and impact strength of the joint made by joining Al6061-T6 and Al1100.

In this study the 6mm thick Al 6061-T6 and Al 1100 materials were used as the workpieces for the Friction Stir Welding.  The given table shows the chemical composition of the Al 6061-T6 and Al 1100 aluminium alloys. The tool used for the process is made of H13 steel with threaded cylindrical pin. The tool was prepared on Lathe machine by performing required operations. After the fabrication of tool, it was oil quenched to bring its hardness to 55 so it can be effectively used for FSW process.

The following table shows the various process parameters and their ranges –

The specifications of the machine are as follows –

2. Impact Test:  Impact Charpy test was performed at the room temperature using pendulum type impact testing machine. The values of the energy absorbed in the fracture were noted and that absorbed energy is termed as impact toughness of the material. The impact test carried out at three different rpms and two different feed speeds. The work specimens were placed with weld joint at the centre line. The impact strength first increased with increase in the tool rotational speed due to proper mixing of material to form joints but with more increase in tool rotation speed the impact strength starts decreasing due to high heat which forms the coarse grain structure. The specimens do not split into two parts during the impact test which is due to the high ductility of the joint. [5] The specifications of the impact testing machine are as follows –

3. Microhardness:  Microhardness test was performed at Micro hardness tester at the Bicycle and sewing machine research and development centre Ludhiana. The work specimens were prepared according to ASTM E384 standards. The specimens were polished at the Metallurgy lab of the same institution. The deformation on the surface was formed using the pyramid which is diamond shaped. Hardness calculation was done according to the load applied on the specimens. The load applied in the s hardness test was 200 grams or 0.2 gm for 10 seconds. The dimensions of the impressions made with diamond were recorded with the help of the scale of eyepiece. 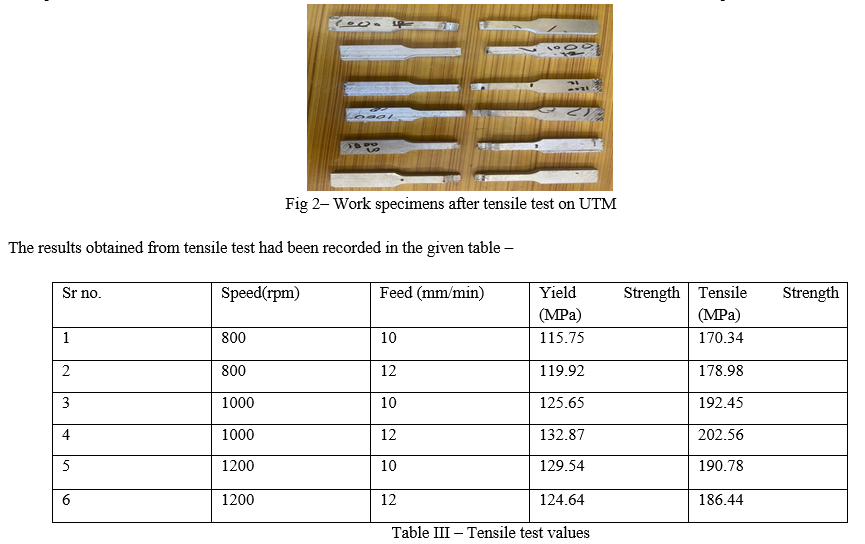 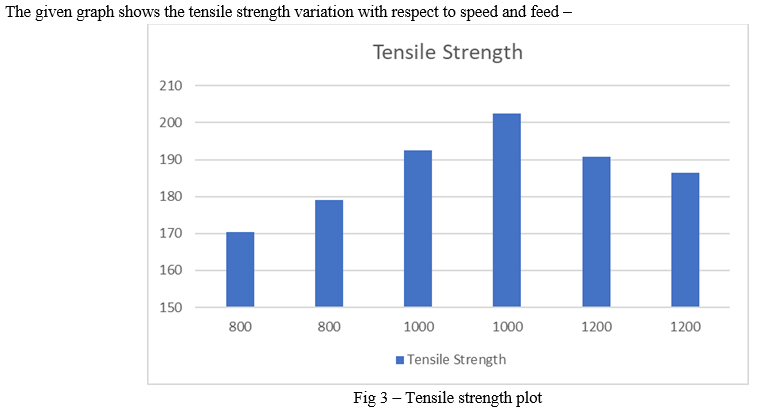 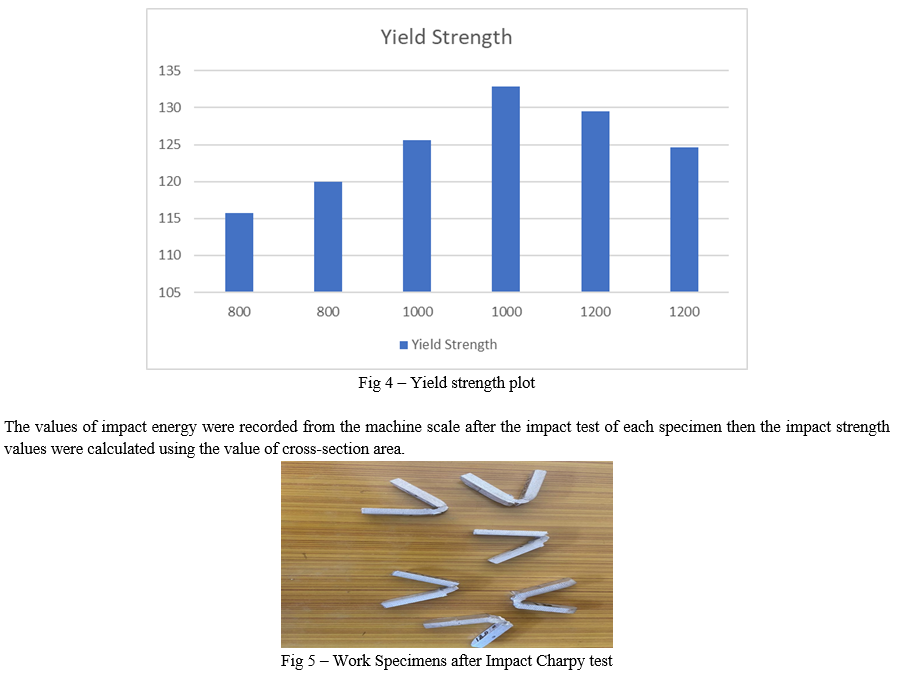 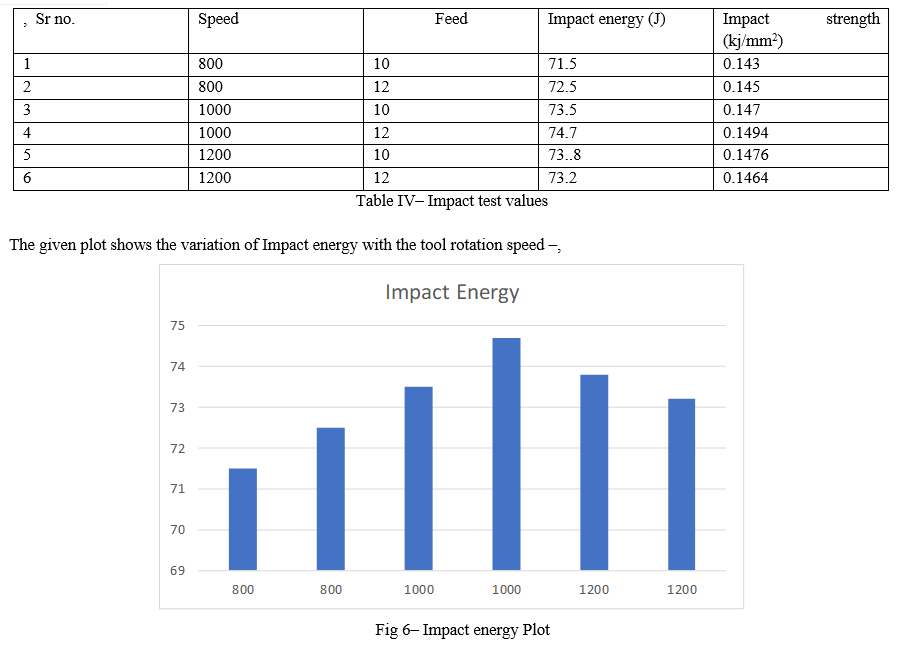 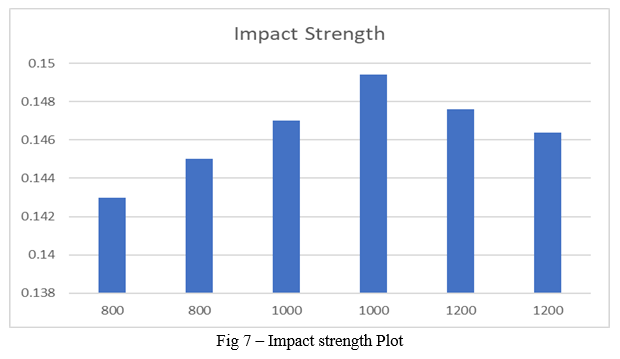 The impact energy and the impact strength were found to increase with increase in the rpm and feed. The highest values were obtained at the tool rotational speed of 1000 and feed of 12 mm/min.

The hardness tester gives the direct values of the micro hardness because of the calibration done. The variation of the hardness on both sides from the weld zone was calculated and the graph was plotted.

The research has vast future prospects that can be explored further to refine the research and explore more in the Friction Stir Welding of Al 6061-T6 and Al 1100.

The Friction stir welding of Al 6061-T6 and Al 1100 work specimens was performed on the vertical milling machine. The tool used for the welding process is cylindrical threaded pin tool. The samples were prepared by cutting the specimens using water jet cutting machine. The samples were tested for obtaining the tensile strength on the Universal testing machine. 1) It was found that the tensile strength first increases with increase in the tool rotation speed then decreases with increase rpm. 2) The Impact strength values were obtained with Impact Charpy test using Impact testing machine. The highest impact strength value was obtained at tool rotation of 1000 rpm and 12 m/s. 3) The joints exhibit good mechanical properties at the tool rotation speed of 1000 rpm with increase in tool rotation speed the tensile strength and impact strength decreases due to coarse grain structure. 4) The microhardness value of the weld zone lies between the microhardness values of both alloys. 5) The microhardness value increases after decreasing when moving both sides from the weld zone.

Copyright © 2022 Gurpreet Singh, Sachin Saini, Ajay Rana. This is an open access article distributed under the Creative Commons Attribution License, which permits unrestricted use, distribution, and reproduction in any medium, provided the original work is properly cited.